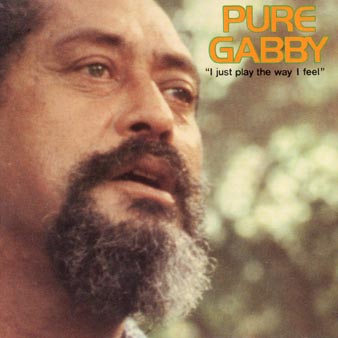 A note from the producer on how this record came to be:

Dave Guard is my name; my music with the original Kingston Trio may be familiar to you. I was born in Honolulu, brought up in Waikiki, and the first record I ever bought was Hi’ilawe by Gabby Pahinui. When my folks gave me my earliest guitar I learned to play in the “G” slack key tuning first. I would hang around the Queen’s Surf night club just to hear Gabby’s trio (with Joe Diamond and Ralph Alapai.) I pestered Gabby for lessons and he showed me one of his “C” tunings, but he said “It’s not how you tune’ em up, it’s how you pluck ’em.” But only recently has Gabby considered himself a teacher: it’s enough that he plays the sweetest, cleanest most soulful, most Hawaiian guitar music ever heard, It’s enough that he has one of the finest voices in the world. It’s enough that when I hear Gabby I’m home.

Some years went by and I continued to collect Pahinui records but was disappointed by not hearing enough of the man himself on them. They would bring his guitar forward for a short solo, then submerge him again in an ensemble of flutes, steel guitars, or whatever was commercially hot at the time. I resolved that if I ever had the money and Gabby were still playing, to try to make a “straight” recording of his guitar and singing with just a little bass and ukulele to ride along for company.

Read the rest of this article on kingstontrioplace.com.

Support provided by
Hawai‘i Tourism through the
Community Enrichment Program